Built in 1896 by Charles Waterhouse, an immigrant from England, Deerhurst Resort in Huntsville has, in its more than 120 years existence, consistently ranked as one of the top resorts in Canada.

Notable as the first resort of its kind to be built on the northern lakes of Muskoka, it was at the time only accessible by steamship, and was considered so remote that the first guests often spent days getting there from destinations including Toronto and the United States. Records in fact indicate that the resort – obviously much smaller than it is today – comprised of only the central Deerhurst lodge perched on four acres overlooking Peninsula Lake (still one of the prettiest small lakes in Canada), with just two guests making the trek and reportedly paying $3.50 each a week, meals included. 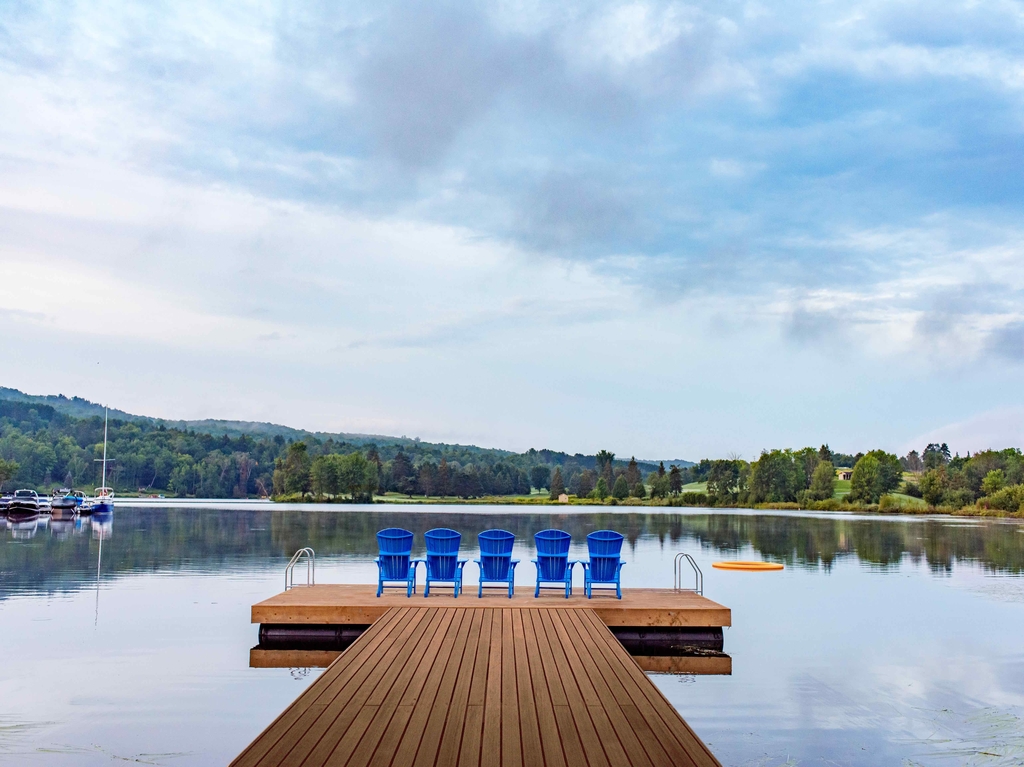 The view from the dock overlooking Peninsula Lake

These days, Deerhurst Resort is now the largest resort in cottage country Ontario, and can host upwards of 1,000 guests in its more than 400 rooms and suites. Despite covering an impressive 800 acres of prime Muskoka real estate, though, it never appears crowded, and has preserved much of the landscape as it would have been in Waterhouse’s day. In fact, a highlight of a stay here, whether for a week’s vacation or a weekend getaway, is walking the property and its hiking trails and enjoying brushes with deer and other wildlife, or grabbing a Muskoka chair and enjoying a perfect beach sunset accompanied by the haunting call of a loon.

Already a popular travel destination among Canadians and Americans, Deerhurst Resort’s profile was given a boost in 2010 when it was selected as the location of the 36th Annual G8 Summit, joining a long list of historic meeting places to have hosted these events.

Why Deerhurst? The decision to host the G8 in Huntsville boiled down to its proximity to Canada’s largest city (Toronto’s just two hours’ drive away, or about 20 minutes by private jet), though as media coverage attested, the town’s clean, natural, safe setting certainly helped. Muskoka, it was noted, possessed the very same unspoiled “sense of place” as the home of the world’s very first G8 Summit in Rambouillet, France… a place also known for its beautiful setting, its numerous lakes, and endless trees.

Long after all the photo opps were over and the world’s leaders packed up and went home, Huntsville – and Deerhurst Resort – is undoubtedly remembered as having been the setting of one of the most beautiful G8 Summit meeting places ever. Rightly so, Huntsville now ranks right up there with notable locations including Venice and Genoa (Italy), Versailles (France), Williamsburg (USA), Gleneagles (Scotland), and St. Petersburg (Russia), further cementing Muskoka’s reputation as a world-class travel destination. 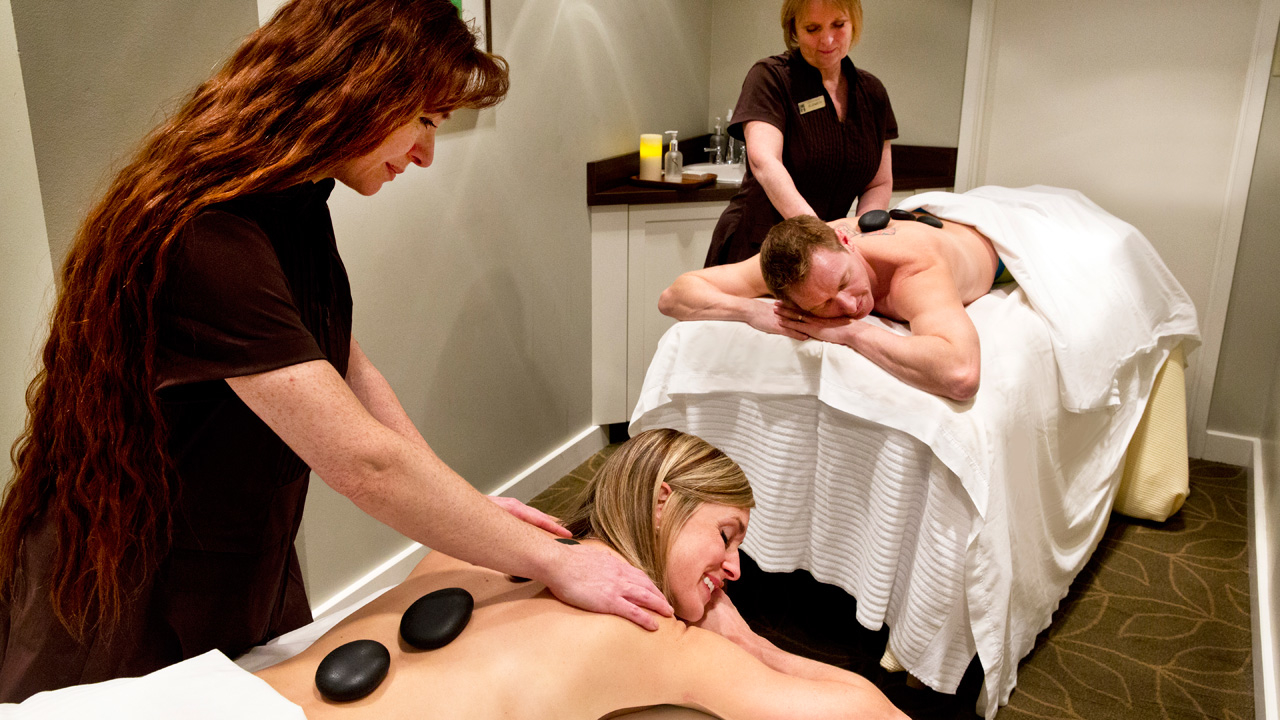 Ranked as one of the top luxury resorts in Muskoka, Deerhurst is as popular a destination for outdoor enthusiasts as it is for those who simply enjoy pampering and luxury and who are looking for somewhere to stay in Huntsville.

Nowhere is this more evident than in the resort’s high-calibre accommodations, which include elegantly decorated hotel rooms with lake views, suites with high ceilings, spacious living areas and balconies, as well as home-away-from-home style one-, two-, and three-bedroom units boasting full kitchens, two or more bathrooms, dining areas, and living rooms.

The resort’s amenities, too, are certainly above-par. Notable outdoor things to do include relaxing on the resort’s private beach, hiking its trail network, playing a round of golf on its two Deerhurst golf courses (widely regarded as among the top Muskoka golf courses), renting a boat (motorized or people-powered, including canoes and kayaks), tackling a treetop trekking course, as well as horse riding. A number of indoor and outdoor swimming pools are also available for guests to enjoy.

Top Huntsville Adventures and Things to Do

There’s no doubt some of the best Huntsville adventures are to be had at Deerhurst.

For those who enjoy motorized activities, the resort has access to endless snowmobile trails, along with thrilling all-terrain vehicle adventures. Other winter activities include hitting the slopes at neighboring Hidden Valley Ski Resort, as popular with snowboarders as it is skiers. Cross country and Nordic skiers are also well catered to with area ski trails, including the extremely popular Ontario parks including Algonquin Provincial Park and Arrowhead Provincial Park, the latter of which also offers great skating and tobogganing fun.

Indoor fun is geared as much to families as it is adults. Highlights for kids include summer camps and programs, a rock-climbing wall, and adventure playground area; and for parents, childminding services are available). Sports fans are well catered to as well, with squash and indoor / outdoor tennis courts available. There’s also a good-sized fitness center, plus a full-service spa. 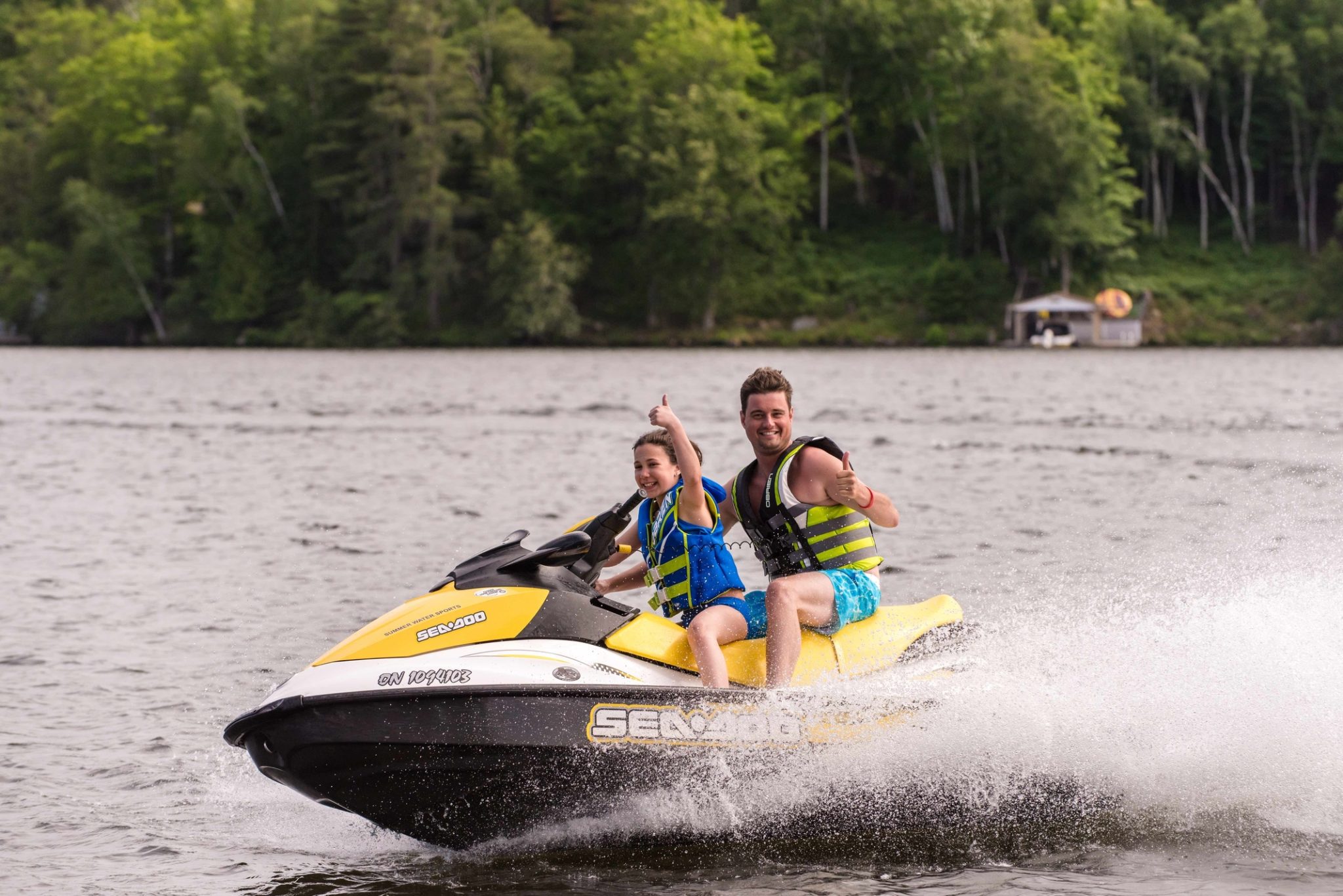 There’s plenty of fun at the lake at Deerhurst

Deerhurst Resort restaurants are also highly-rated, and offer seasonal menus and locally-sourced produce in what are undeniably among the best restaurants in Huntsville. And those seeking great entertainment and events are also well-catered to, with regular music concerts and festivals held here whatever the weather

Whether you’re visiting for a week-long family vacation or looking for romantic Muskoka getaways ideas, as well as Deerhurst Resort deals, packages, and upcoming events, visit their website at https://deerhurstresort.com.

Kim Kerr-Dearsley is a Muskoka-based freelance writer who specializes in luxury travel and lifestyles.